The FM Group has announced that luxury apartments have been sold out in its Cathcart House development, one of Glasgow’s most iconic buildings.

The landmark B-listed red-brick building, located in the city’s sought-after Southside, has been exclusively redeveloped by the company into 73 stunning apartments. Previously the Scottish Power HQ, Cathcart House now provides a mix of one, two and three-bedroom flats, and two-bedroom penthouses.

Apartments are spread over five floors, benefitting from an attractive internal landscaped courtyard area. The building is built of attractive red brick and there are lifts to all floors and allocated car parking space for the residents. 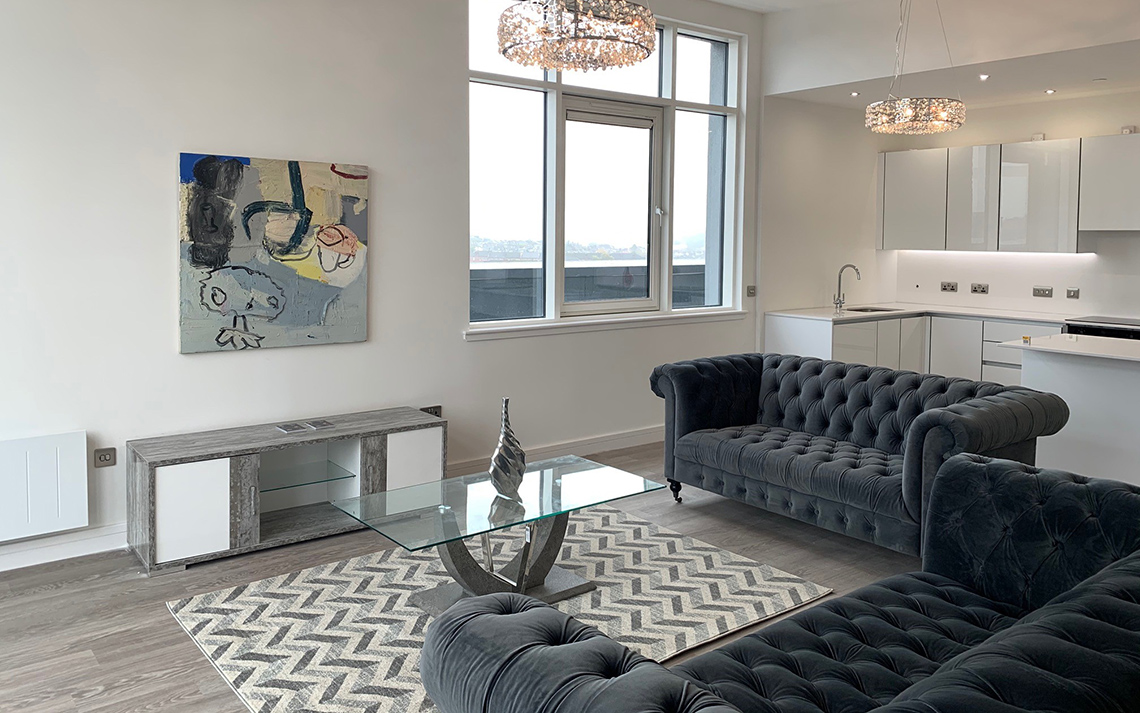 Cathcart House was designed by Scottish architect, Sir John James Burnet, and built by the Wallace Scott Tailoring Institute. It was completed in 1916, however plans to further extend the building began in 1919 and lasted until 1922.

Bought by Scottish Power in the 1950s, property developer FM Group acquired the building in 2017 and has been extensively refurbishing it through a £40m redevelopment plan.

As a listed building, Cathcart House retains its original hallway entrance and its marble staircase with decorative balustrades.

It is ideally located, offering residents access to a number of local parks, including Pollok Country Park and Queens Park.

In addition, the Southside’s collection of independent bars and restaurants, coffee shops, boutiques and museums, has made it a hub for those that love both culture and community.

Schooling in the area has become one of the main reasons people want to live here, and there is an excellent choice of nurseries and highly regarded public and private schools.

With excellent rail, car and bus routes, Cathcart House is also perfectly placed to provide ease of access to the City Centre and beyond. Additionally, Glasgow International Airport is easily accessed via the M77 and M8.

“We are very proud to be part of the redevelopment of this iconic building into luxury apartments, which we are delighted to announce have now sold out.

“As a listed building Cathcart House, preserves several majestic aspects of its original design, such as its hallway entrance and original decor.

“Its convenient location, both by being close to the City Centre and yet surrounded by green areas have also proven a clear draw for buyers.”

Cathcart House was designed by Sir John James Burnet, a Scottish Edwardian architect and built by the Wallace Scott Tailoring Institute in 1913. An extension of the building began in 1919 and lasted until 1922.

In the 1950s, Scottish Power acquired the building which became its headquarters. In 2017 developer FM Group acquired the property with plans to refurbish it into luxury homes.

About the FM Group

The FM Group is an award-winning property developer with a well-earned reputation for delivering unique, high-quality developments.

It was founded by Jonathon Milne in 1997 and started from small beginnings with the refurbishment of a single apartment in Edinburgh.

The FM Group has completed some remarkable projects in a variety of locations around the world, including the UK and the Caribbean. This includes delivering thousands of homes and millions of square feet of commercial oﬃces, leisure and retail space.

The FM Group is currently delivering high-quality homes in exclusive locations. This includes new-build apartment buildings, converted castles and other listed properties, as well as new villages and luxury resorts.

It invests in various business ventures and has a commitment to agriculture and the renewable energy sector.